The Ironman Canada bike ride has been touted as gorgeous with challenging terrain and one of the most spectacular bikes on the Ironman circuit.

I think I have to agree with the first point- it was stunning and the hills and rollers were breathtaking!

I was so happy to be finished one discipline and starting the second.

I realized I messed up my Garmin so spent a while with my head down trying to figure it out! I also wore my jacket, knowing I’m always super cold. I ended up taking it off quite quickly, but was still glad I had it in my back pockets in case the elevations were stormy. 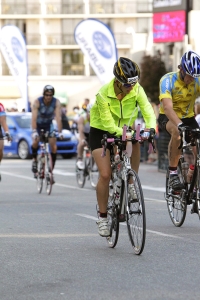 I saw my aunt and uncle soon after I left transition and was so grateful they were there cheering us on!

We started riding through Penticton and I got passed by what felt like hundreds of people. I read a lot of IMCA race reports from previous years and they all said to go slow at the beginning when it’s flat and your adrenaline is pumping. Also, although my biking really improved this year, biking is still my weakest leg. And I had a long distance and lots of climbing to tackle.

The whole time I was hoping Kelly would pass me soon so I’d know he safely made it out of the lake. I got my wish soon enough when I heard him calling me! He slowed down and we talked for a couple minutes before he flew away! 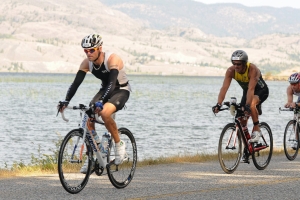 The first 60km were pretty uneventful. I was passed a lot, I tried to fuel up, and you couldn’t wipe the smile off my face.

The first major hill is Richter’s Pass, climbing 1,270 feet in elevation over seven miles with grades ranging from 5-9%. There were tons of spectators on the climb, and they were so encouraging! I had a smile on my face the whole time. I also passed quite a few people on the uphill, which was a good confidence booster. I was really happy I decided to use my road bike for this course to better ride the hills. (Most people I passed flew by me as soon as we declined, as I am too scared to go faster than 50km/hour!) 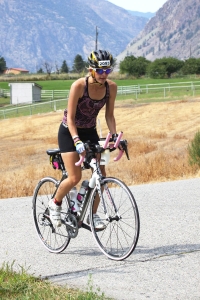 This is also where I saw my parents! I can’t stress enough how great it is to have spectators during an Ironman. It is such a boost!

The views throughout the climb and up top were a great distraction from the challenging nature of the course. There were countless vineyards and large fruit farms with their rows of trees. Luckily, it was really hot out as there have been pretty bad storms at the top of Richter’s in the past.

I didn’t mind the heat, although I was worried about how I was doing with my nurtition. I didn’t have a plan and tried to take in liquid and other fuel often, but it wasn’t easy with the constant climing.

The middle portion of the race is seven somewhat challenging hills in succession, known as the seven sisters or seven b**ches. I didn’t mind them, but I was definitely starting to tire at this point and wonder how I’d finish the bike and then run a marathon.

I broke the bike into three 60km sections to help me out mentally. I think it worked pretty well. I knew special needs was around 120km and then Yellow Lake, the final climb, was at 140km.

Before the special needs you do almost an L of two out and backs. I ended up seeing Kelly here after his second out and back just before I hit my first. (This was after he ate and drank at special needs for about 15 minutes!) We yelled a quick hi to eachother before he zoomed away again!

As you approach special needs, there’s one more tight turn. A girl in front of me bailed, but thankfully was going slow. Turns out she fell again and took another rider with her when she was grabbing her special needs bag near where I was.

In my opinion, take your time at aid stations and turns. It’s so much safer to lose a bit of time than to be careless (especially if your biking around where I am=not fast)!

I stopped completely to take my bag and grab a water from an aid station. I had rice krispie squares in my special needs that I was craving so I ate a couple while standing there! I carried all my own fuel (salted pretzels, Honey Stinger Chews, PowerBar Harvest Bar) and only took one water from them, as I had all my own liquids (Nuun), too. However, the volunteers at all the aid stations were awesome at cheering!

A little while after the special needs I stopped to use the bathroom before getting back on, ready to finish the last leg of the bike!

We had one more climb to conquer: Yellow Lake. Apparently it’s about 20km and you climb over 1,000 feet of elevation.  It’s not nearly as steep as Richter’s; however, at the late stage of the bike it was supposed to be tough.

It was the hardest part of the day for me. My lady parts were sore, I was tired, and I was ready to get off the bike. I persevered and kept pushing when I really just wanted to take it easy.

A guy and I went back and forth a few times and we both lamented how we thought we were at the top a couple times before realizing we still had climbing to finish!

After Yellow Lake, it’s a lot of downhill into Penticton. I braked a lot but still really enjoyed the rest for my legs! Once we got into Penticton, I was all smiles again knowing that once I got off the bike I only had my favourite part to go.

There’s a part near the end of the bike where you see the runners heading out. It was crazy hot at this point and the runners looked like they were pretty exhausted. Yikes- I wondered what the run had in store for me.

I kept my eyes out for Kelly and ended up seeing him again!! He called out for me to come and catch him and I thought there is no way in heck. 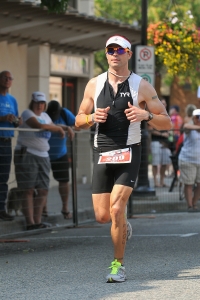 The crowds were incredible the closer you got to transition. The energy really helped to finish strong! Into transition I saw my parents and aunt and uncle and couldn’t wait to get out onto the run.

They had so many volunteers, so one grabbed my bike to rack for me. I must have had the biggest grin on my face when I let go of my bike!!

I hobbled to get my special needs bag and went back into the female tent. I changed my shorts, emptied the pockets of my shirt, changed socks and shoes, put on a visor, and put some fuel into my shirt (salt pills, a gel, and Sport Beans).

Again, I went and got sunscreen put on me. The volunteer seemed taken aback at how burnt part of my back was. But I couldn’t feel a thing and left transition SO happy to be running.