Pattaya is only a couple hours drive from Bangkok, so we added it on when we had a couple extra days in the region but didn’t want to travel too far. 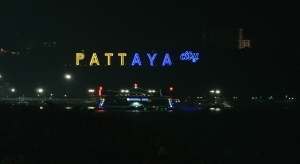 It was our first time visiting, and most likely our last. The sexual exploitation of Thai women made me really sad. (I realize Thailand is well-known for its prostitution; however, it isn’t nearly as apparent in other places. And you don’t see men treating women like objects as you do here.) Also, due to its proximity to Bangkok and some factories between the two places, there is quite a bit of smog and pollution in the air and water.

With that being said, we still made the best of it and really enjoyed ourselves! We stuck to our resort for two of the three days and totally chilled out.

We stayed in another Amari, the Orchid Pattaya, and were upgraded to an incredible suite.

The living room in our suite!

In the evenings we would venture out for amazing dinners, foot massages, people-watching, and sight-seeing. One of our highlights was a concert promoting young, local bands. Young Thai girls can really rock!

(Another highlight had to be the pancake machine at our hotel!)

I also love the hustle bustle. The streets were super busy with people.  The roads were always busy with traffic- cars, trucks, carts carrying food or other goods (like shoes!), scooters, you name it! 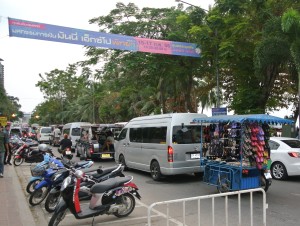 One of our more interesting adventures was an early morning run. It was the day after Valentine’s Day, so the bars must have been in full swing the night before. We ended up running down Walking Street, which is popular for its many clubs. The people still drinking combined with other sights and smells made us feel like we stumbled into the twilight zone! Too bad I didn’t carry a camera with me!

Although it’s not really a family place at all, there is still a lot to do for couples or families. There are many tourist attractions in and around Pattaya, including a Tiger Zoo where you can get your photos taken with tigers, island day trips, and various parks and gardens.

After our three days were up, we headed back to the Suvarnabhumi Airport in Bangkok to hit the pristine beaches of Koh Samui, which was the highlight of Thailand for me by far!

On holidays, do you typically spend a lot of time at a resort or venture out?

Typically we rarely spend time at our hotel or resort. It was kind of nice to do it here!

This entry was posted in Holiday, Uncategorized and tagged Amari, Pattaya, Thailand. Bookmark the permalink.