I’ve been a little MIA lately but for good reason! A few weeks ago my husband pitched the idea of doing a half Ironman race to help prepare for Ironman Coeur d’Alene.

So we signed up for the Oliver Half Iron and raced it this past weekend!

It was a complete whirlwind. We were only away for 68 hours and drove 2,280km in just over 25 hours. It was all worth the exhaustion I feel this week!

The race was in Oliver, BC and is a stunning course. Part of Ironman Canada/Challenge Penticton rides through the area.

This was the 10th annual Oliver Half Iron. The 2km swim was two loops in a beautiful little lake, the 93km bike was two loops on gorgeous roads surrounded by orchards and vineyards, and the 21km run was two loops mostly on river paths. Nearly 750 people signed up, and 579 people participated.

This was also the first race I saw bike support numerous times! This community loves triathlon, and it shows!

I didn’t plan to taper and wanted to use the race to finish a big week three weeks out from Coeur d’Alene. I got pretty busy and ended up tapering off for five days leading up to it.

We got to Oliver on Saturday morning and went for a short bike and run. We usually swim before a race, too, but I didn’t want to get wet and cold! After we registered, we headed to our hotel the next town over (dazzling Osoyoos) to check in and get our transition bags together. We ate a quick dinner before going back for the athlete meeting.

After that, I crashed hard and slept really well. (The perk of not being well-rested before a race!)

We woke up bright and early to eat before heading to the race site. 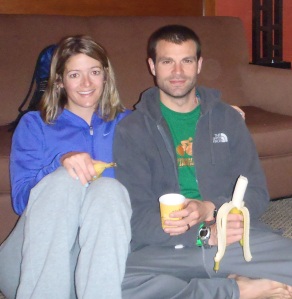 We both like to be early so got there before there were any lineups for body marking and got into transition with lots of space to set up. It was pretty chilly in my books (only 9 Celsius) and the grass was soaking wet. My feet were numb before the day even began!

Although I was ridiculously nervous leading up to the race, I was giddy the morning of and ready to get it started.

(I swim two km faster in practice so was surprised at the time! See lesson 1!) 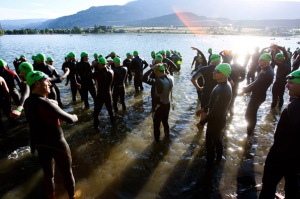 There were three waves, and Kelly was in the first and I was in the second. I saw him off and then nervously waited by myself for my start seven minutes later.

Since I was so cold, I didn’t want to go in the water a second sooner than I had to and therefore didn’t do a warm up.

Lesson #1: Always do a swim warm up if you can! It really helps ease anxiety and spikes your heartrate so it won’t be so shocked when you start the race.

The first half of the first lap wasn’t great! I couldn’t catch my breath and swallowed many mouthfuls of water. At one point, I tried to put my feet down which was so silly and freaked me out!

Eventually I got into a rhythm and made it around both turn buoys without too much trouble. We had to get out and run a few metres before hopping in and doing it again. I liked this since IMCdA is two loops. The second loop was a lot better but I sure was glad to get out and get my wetsuit off!

Transition was about 600 metres away from the lake, up a little hill and then down the road. My feet were numb so they hurt a little, but it was better than I expected! I also liked it since the run warmed me up nicely.

I hit a porta-potty right away: barefoot! I cringed but knew it would save me a lot of time. It took me a while to change since it’s so hard to put a sports bra and arm warmers on when you’re wet!

Eventually I had on all my gear, ran my bike out of transition, and started pedalling. 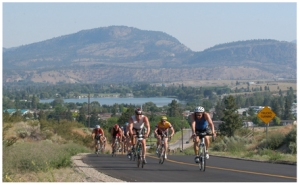 The ride was awesome- great roads with incredible scenery. It wasn’t very hilly but it sure was windy for one long stretch. I went from loving the bike to hating it to loving it again depending on whether I was riding with or against the wind!

I tried to push it, but my time definitely doesn’t reflect the effort!

I ate 1.5 Clif bars, 1.5 packs of Honey Stinger chews, and drank two bottles of pink lemonade Nuun. I always try to take all my own fuel for ease.

I love T2 because it means I only have my favourite sport left! I hung my bike on the rack, grabbed my running stuff, and made a decision to stay in what I was wearing, hit the porta-potty again and ran out of there!

Lesson #2 learned: Never try something new on race day! I wore a cycling jersey I’ve biked in countless times before but never ran in. I paid for it later.

I’ve only done two small bricks this season, so I wasn’t sure how I’d feel. Right off the bat, you head up a little hill where there was a lot of crowd support. Since it’s a two loop run, there were already quite a few people on the course.

I decided not to look at my pace on my Garmin and just go with it. It felt like I was moving so slowly but I was passing quite a few people.

The back of my heel was quite cut from the previous weekend so it hurt.

Luckily, I was able to ignore the pain for the majority of it!

I saw Kelly partway and that always gives me a burst of energy! He was feeling good and looking strong! I kept chugging towards the river and the wind was pretty strong but nothing I couldn’t handle.

At this point, I started to notice burning under my arms (see lesson #2.) I made the decision to ignore it!

I always break the run portion of triathlon into pieces, which makes it seem a lot more manageable. The first lap flew by and before I knew it I was turning around to do it again. I didn’t look at my pace at all but had to check my watch a few times for distance. I told myself to pretend the run was 22km, which was lucky because that’s the final distance my Garmin ended up showing!

I saw Kelly again on my way out and was so happy to see he was almost finished the race! I kept focussing on people in front of me to pass.

With about 2km left I started to hurt quite a bit but knew I could hang on. Kelly was on the sidelines cheering for me, and then it was a slight downhill to finish by the lake.

I was so happy to have finished!

Once I’m done, I’m always ecstatic and can’t wait for the next one.

I dipped in the lake to cool off and clean up. We left within the hour and were sitting in a vehicle for the next nine hours before sleeping in the van for a few hours and hitting the road again!

Shockingly, I wasn’t as sore as I thought I’d be. I have two bad burns under my armpits from my cycling jersey seams, my heel is still cut deep, and I have a black toenail.

I’ve taken it easy so far this week and plan on tapering for the next two before Coeur d’Alene. I definitely didn’t feel great throughout the entire race, which confirms what I already knew. I’m not in the shape I should be in or would like to be in going into Coeur d’Alene.

I’m sure it’s going to hurt! But, that’s part of the experience. Regardless of time, I’m hoping to have a fun day!

What valuable lessons have you learned from race errors?

This entry was posted in Race, Weekend highlights and tagged lessons, Oliver half iron, triathlon. Bookmark the permalink.